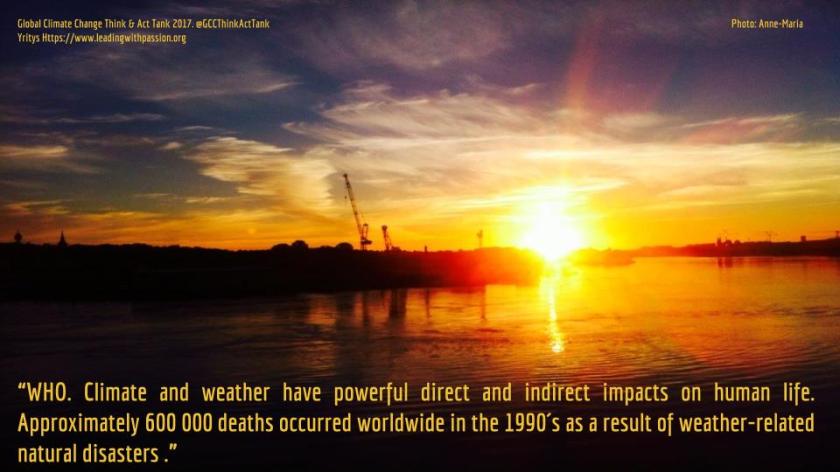 “WHO. Climate and weather have powerful direct and indirect impacts on human life. Approximately 600.000 deaths occurred worldwide in the 1990´s as a result of weather-related natural disasters.”

According to current research, hundreds of millions of people will face deadly weather events by 2100. In Europe alone, it is expected that up to 150.000 people could die every year due to climate change. The Study,  “Increasing risk over time of weather-related hazards to the European population: a data-driven prognostic study”, funded by the European Commission, reveals that at least 2/3 of European population (more than 350.000 million people in Europe alone) could be faced with climate change and weather related disasters by 2100. These numbers are enormous. (Forzieri, G., Cescatti, A., Silva B.e. & Feyen, L. Lancet Planet Health 2017;  1: e200–08).

If in Europe alone, which is the leading continent in environmentally friendly practices and actions against climate change, the prognosis suggests numbers like this, what will people on other continents face? Asia is the most populated continent on Earth, currently emitting the most greenhouse gases in total, while the Americas is the leading greenhouse gas emitter per capita, the U.S.A. currently emitting more greenhouse gases per person than any other country in the world. Our world cannot handle these increasing extreme weather events without serious damage in all areas of life, as we see as an example on National Geographic´s video where Firefighters Battle the Infernos of Climate Change:

Connect with me on Twitter @annemariayritys – for climate-related posts only @GCCThinkActTank & to receive my newsletter delivered personally to you, subscribe to Leading With Passion